Recently Amos, Graham, Isaac and I snowshoed to a winter hut in Katahdin Woods and Waters National Monument. We were in Maine for the holidays, and the guys like to do a winter trip when they’re all together. This year I was the tag-along-girlfriend, also know as Chris’ replacement (I don’t know who he is…).

Amos chose Katahdin Woods and Waters over Baxter State Park because, at the time, it was our country’s newest national monument and he wanted to check it out. We had followed the Park’s story in the news and sided with Roxanne Quimby, a founder of Burt’s Bees, and President Obama in wanting to protect the land for future generations to enjoy. The idea of exploring this newly acquired, federal land was appealing.

So he reserved the Big Spring Brook winter hut via email, and we prepared for our 14mi round trip in the dead of a Maine winter. Did it matter that the projected temps were 10-15f, overcast, and maybe snow/rain? Nah.

So, did I freeze my butt off like I expected? – Kind of.

We woke up at 5:15am and began the two-hour drive north around 6am. Eventually, after a stop at Dunkin’ Donuts, the grocery store, and driving down several dirt roads, we made it to the privately-owned lodge, Bowlin Camps. When I stepped outside of the car, I immediately felt the snot inside my nostrils start to crystalize. My fingers also ached from the cold as I snapped on snowshoes. For me, hand warmers and mittens were essential.

Above is a picture of a very useful map. We could not find this map on the internet, though it was needed to figure out our route and mileage. So now it is on the internet. Starting at Bowlin Camps, we crossed the East Branch of the Penobscot River by way of a suspension bridge.

Our group traveled close to a mile-an-hour since we were “breaking trail.” If you haven’t snowshoed on ungroomed trail before, blazing a new path through crusty, deep snow requires a lot of effort. With each step we punched through 1-2 inches of thick “ice” and then sank a good 6-inches.

When leading the way, I felt as if I were on a stair-stepper, stepping straight into hell. My hip flexors and thighs screamed as I expended extra energy pulling each foot, and an entire snowshoe, out of the snow. If I didn’t lift my foot high enough to clear the snow I fell. Imagine a small woman, all puffy from three-jackets and a full pack, tumbling into a pile of white snow like a toddler. That was me. Once I fell forward and landed with my face smack dab on the ground – buuuuurrrrrr.

With that said, Graham lead most of the way, Amos a close second, me a meek third, and Isaac was a grateful “sweeper” with soaked jeans and a quiet demeanor. We walked in a single line, with our designated “leader” breaking trail. And then the second-in-line breaking in between the leader’s steps. Each step was a loud “crunch.” Conversation was impossible, and the noise was the opposite of a peaceful walk in the woods.

Hours passed. My nose would freeze to the point where I couldn’t move my nostrils, so I’d cover it with a fleece buff for my breath to warm it. But then my glasses would fog up. And then the fog would start to freeze.  So I’d quickly uncover my face and feel the sting of the cold air all over again. #rinseandrepeat

We all grew very very tired as we made our way onto the Little Messer Pond trail, and then Messer Pond – Orinn Falls. We barely stopped to eat or rest – the cold would set in and I’d feel chilled to the bone after 5 minutes. Audible grunts and sighs rang out among our noisy footsteps. Graham lost steam and Amos had a look of defeat. I tried leading a couple of times after “hitting the wall” but barely kept it together. I’d look down the trail, pick out a tree, and say to myself “I can lead until that tree.”

And then every step felt like I was wading through thick mud, or walking with cinderblocks for shoes, and I’d fall before reaching my landmark. It was also getting late. 3 o’clock came around and the sun was scheduled to set an hour later. Mild panic set-in but didn’t overcome us. I mentally went through the steps on building a snow cave, just in case. Now imagine how we felt once the cabin was in sight! The winter hut was a welcomed relief!!

It included an outhouse and a fully stocked woodshed. As well as a kitchen, enough bunks to sleep a massive group, two lofts, and a wood burning stove (very very essential). I wanted to just move right in and live there; my life goals now include an A-frame house/cabin of sorts. 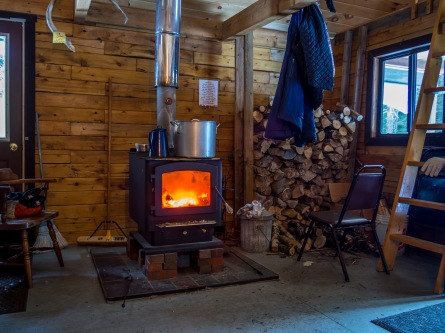 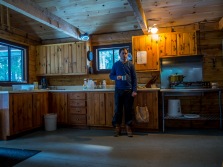 We got the stove cranking (I say “we” lightly. The boys jumped on that task. I made ramen.). When we arrived, the inside of the cabin was 20f so fire and warmth were of top priority. Outside it started to sleet. Isaac and I settled in by the stove and waited for big buckets of snow to melt, and then boil.

Eventually we made “second dinner” of three nonmatching pasta sides atop the stove. Amos made a timelapse of the process.

Bedtime by 9pm. We all slept in one of the lofts. I woke up in the middle of the night SWEATING and took it upon myself to delayer and open windows. It felt like freakin’ Florida! *Note to those who venture out to the Big Spring Brook hut, the stove does an excellent job. Open a window.

Outside it snowed and then rained. I awoke at one point to the loud sound of snow falling off the metal roof. In the morning the temperature outside rose to a balmy 40F (inside, it was 60!). Ready to skedaddle, we made hot chocolate and oatmeal and did house cleaning chores, i.e. packed up gear, swept, cleaned dishes, stocked firewood. Amos made another cool timelapse of use going in and out of the cabin with the clouds moving overhead.

And then we hiked back to the car on broken-in trail! It was significantly easier, and the sun actually made an appearance. Although sore, we were all in a much much better mood. Heck, the hiking was actually enjoyable! What was originally a 5.5 hour trip became a leisurely 2. 5 hour stroll. It’s funny how much of a difference trail makes.

Our pace was so pleasant I could stop long enough to observe a couple of new trees. By smell, I identified the sweet, candy-like fragrance on trail to be northern white-cedars and the fresh scent of fir as balsam fir. I couldn’t help but break off young branches with my thumbnail and hold the needles up to my nose as I hiked, followed by deep inhalations. I also enjoyed the bright, burst of green from all the soft mosses and ruffled lichens on the trees. 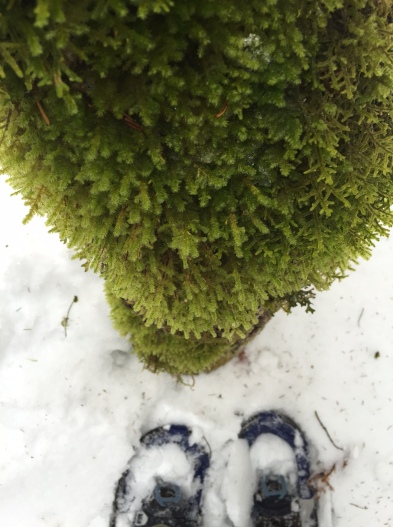 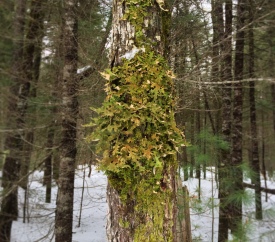 Now, you’re probably wondering if this is a trip worth taking; the first day sounds miserable, huh? Short answer – yes and yes. If you want to do it, do it. The landscape, although uneventful, gave me a sense of happy satisfaction. I loved noticing the differences between trees and other plant-life, and spotting signs of wildlife. Isaac and I noted the fresh tracks of a bobcat next to the trail, and saw numerous scat/droppings. Our group also saw multiple trees with shredded bark, signs of a moose or buck having rubbed its antlers to remove dead velvet.

These kind of experiences made my heart happy, and the treacherous journey made my body thankful for the Park’s amenities. I highly recommend making the trek out there during the winter with some friends. We were truly alone in the woods, and able to enjoy the solitude. One of my favorite things to do is stand completely still in deep snow and hear nothing – a few times during our trip, we all stopped moving just to soak in that silence. And peace.

So if you’re interested in staying at one of the winter huts at Katahdin Woods & Waters National Monument, contact Mark and Susan Adams at lunksoos@gmail.com. They are temporarily managing reservations for the National Park Service, and were very pleasant to communicate with, as well as helpful. I don’t know who exactly maintains the cabins but they do an A+ job. Thank you! I left a couple of shot-sized whiskey bottles on the counter, in gratitude.

Lastly, I want to state that THE day after our trip, President Obama designated two new national monuments in Utah and Nevada. My ability to say I had just explored our country’s newest national monument was over within 24 hours, although I cannot complain one bit. Woo-hoo for relevancy! I hope someday soon I can explore Gold Butte National Monument and Bears Ears National Monument, too. To learn more about these places, and Obama’s latest effort to protect public lands, click here.

One thought on “Trip Report: Snowshoe at Katahdin Woods and Waters”